Photographer Paul Monaghan had a creative idea to do a chase themed photo with his two sons. It was a simple idea of police chase with one son on his trike and the other in his toy police car chasing him. However actually doing the shoot was a little more complicated than it sounds!
Creating the image involved multiple frames, off camera lighting and a camera with more control over ambient light than a typical DSLR. Luckily that is where the DP series of cameras came to the rescue! Here is Paul’s story of how he produced this fantastic chase image;
EQUIPMENT:
Sigma dp2 Quattro
Sigma 530 Dg Super Flash
Quantum Q flash 200w/s
Radio Trigger
LOCATION:
One of the most important part to any shoot is the location as not only does it add visual elements to the image but can also introduce obstacles you have to over come.
Luckily for me my ideal location was next to my home! A path behind a row of houses with the added bonus of a lumpy ground which would allow me to introduce a jumping element into the shoot making for a more interesting image.
SHOOTING:
After deciding on the location it was time to decide the best composition for the shot. I decided to have the camera almost at ground level and to the right of the path. This gave me more space to place both of my sons into the frame and at the same time the low angle provided an unusual perspective for a more interesting image. 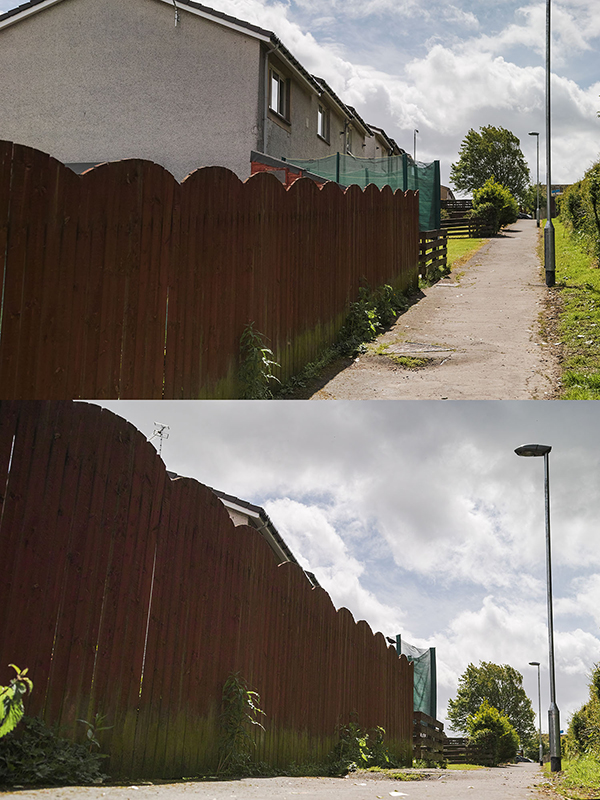 Once I had the camera locked down on the tripod it was time to think about lighting.
LIGHTING:
On this location, the sun was to the left over the fence so I decided to put a light to the front left of the frame to fill in some of the shadows created by the fence. The second light was used to create the chase scene and was fitted with a blue gel. This was positioned at the back right of the frame to mimic a blue light from a police car.

As this is a composite shot, it is made up of a few frames. 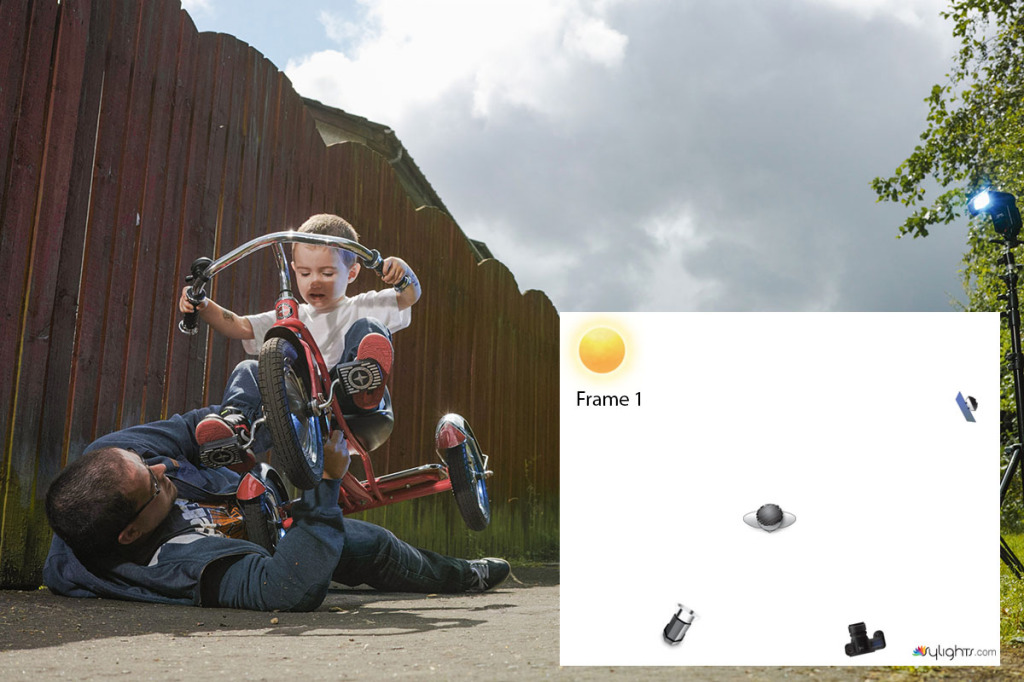 For the first frame, I was laying on the ground lifting the trike into the air with my son sitting on it. Since I couldn’t see what I was doing from this position, I decided to get a few frames, changing my position & lift on each one, and deciding afterwards which was the best to use.
The second frame involved my younger son with the police car and moving the blue flash on top of the car, aiming to the fence. My lovely wife helped to hold the flash in place while manoeuvring the car into position. 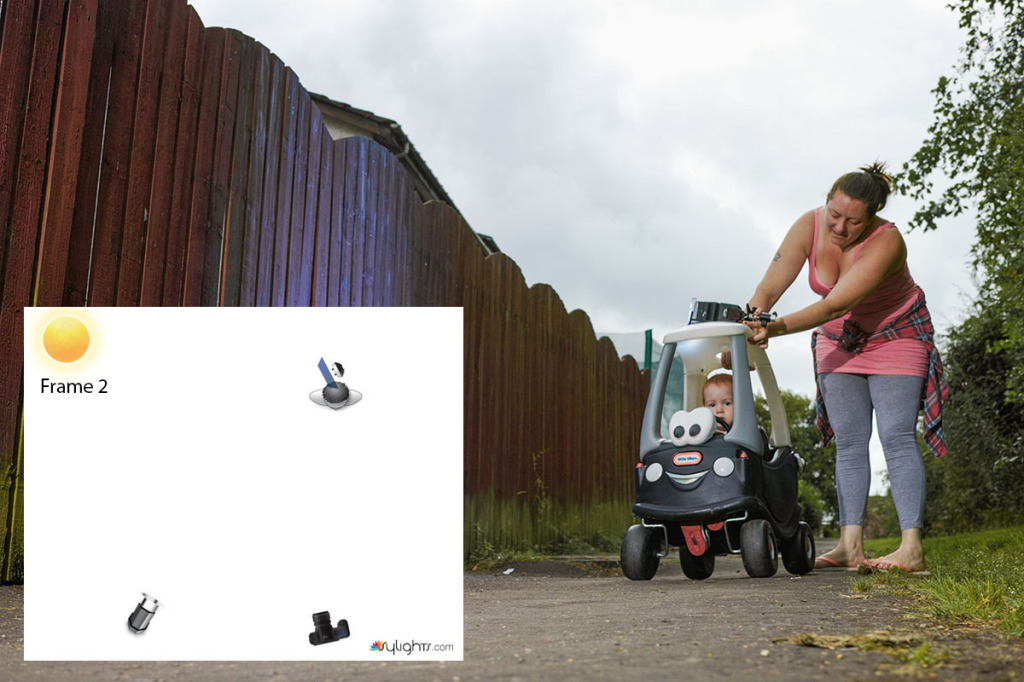 These two images really are the main make up of the final image with a few extra modifications such as changing my son’s eyes which were closed in frame 1 and sampling from one of the many frames I had taken.
POST PRODUCTION:
I knew from the start that to produce the final image would require some post work.  Not only did I have to merge the elements of the different images into a single frame but I also had to remove myself and my wife from the image as well using layers, masks, healing and clone tools in the editing software
To start I loaded both images as layers by going to “file – Scripts – Load files into stack…” and then selecting the images. This gave me a file with two images loaded into layers one above the other.
After this I created a mask by pressing “Layer – Layer Mask – Reveal All” or pressing the mask icon at the layer panel, which should make a mask icon next to the image which can be selected to activate and then use a black brush to hide parts of the image or a white brush to bring them back. 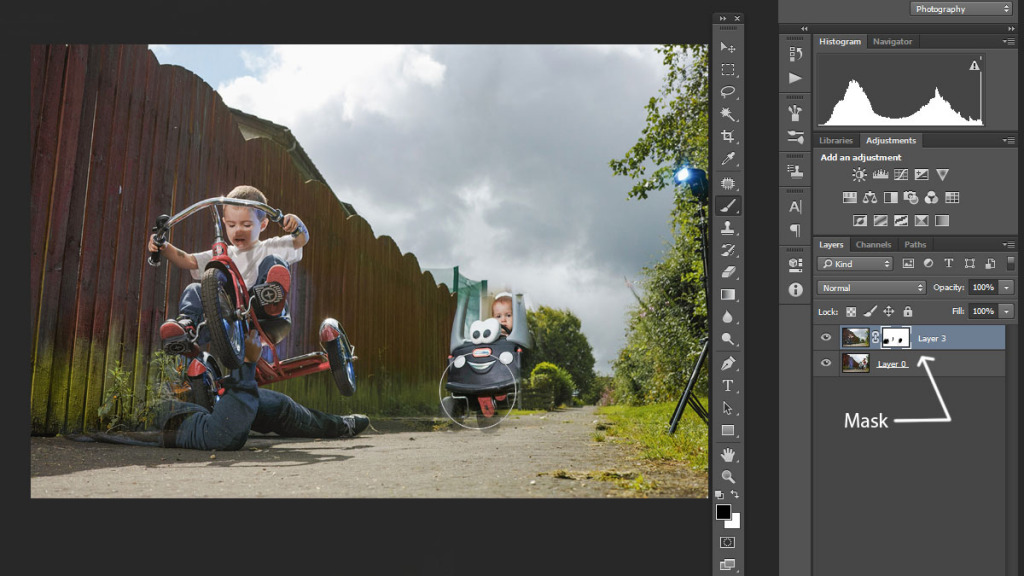 Once I had the images joined together my next job was to remove myself and my wife from the image. While this would have been done using the mask layers again as stated above,  removing the detail of my body would reveal detail from the image below. However there are some sections where I’m covering parts of the scooter with my hands which need a different tool to modify this part of the image. To fix this area I used the healing and cloning tools found next to the normal brush icon.
The healing tool is great as you can simply brush over stuff you want to fix but it can get confused. When this happened I switched to the clone tool as this let me select a part of the frame I wanted to copy and then you brush it over the part I wanted to fix.  Using the alt/option key allowed me to reselect the part I wanted to copy from easily. 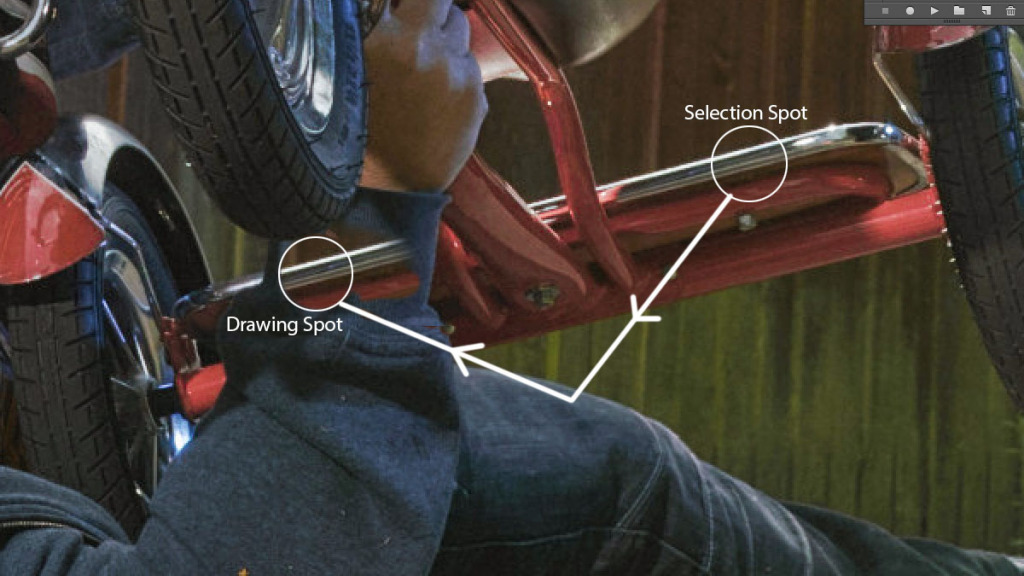 After playing with the colours a little and spending some time with both the mask and clone tools, my image was finally ready
FINAL IMAGE: