Photographer Marco Dadone lives in Northern Italy an has a deep love for moody landscapes especially Celtic places, Scottish Islands, Brittany and Ireland.  Marco’s article ‘Hidden Ireland’ was featured in the November issue of Landscape Photography magazine What is it that brings extraordinary places like Ireland and their unique stories together? Marco Dadone explains why he has fallen in love with the country  in his article “Hidden Ireland” written for Landscape Photography magazine.
Ireland is a land known for being emerald green and blessed with a unique fusion of past and present. For me, it is also an almost spiritual place, whose soul becomes visible to those who approach it with genuine interest. Through my images I hope to show you a story of the more secluded ‘Hidden Ireland’.

My third trip to Ireland begins in the wild northwest of Donegal, capturing a majestic sunset at Bloody Foreland’s cliffs, down on its bay of round stones. The only sound there being the wind and the waves, waiting for the last blink of sunset to show itself in all its intensity. I put my SIGMA SD Quattro H on the tripod in a very low position and just in front of the crashing waves, with the SIGMA 12-24mm f/4 DG HSM at 12mm, a 0.9 ND, a 0.6 ND grad to balance the dynamic range and a polariser. I opted for medium-long exposure of 20-30 seconds to capture the pale tones of the incoming blue hour. In all my images I aim to achieve the maximum effect in terms of colour and image accuracy – the Foveon-based sensor of the camera and the Art lenses fit my style perfectly. 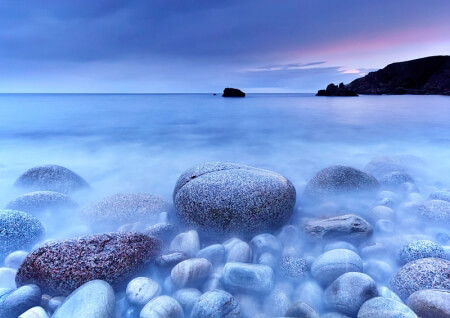 Standing proudly against the elements, fourteen kilometres off the Donegal coast, is the remote and untouched Tory Island. Part of the ‘Wild Atlantic Way’, where the weather can be just as wild, Tory is steeped in history and home to less than a hundred and fifty Gaelic-speaking residents. Led by their King, who is elected by the local community, the islanders have a deep passion for music, culture and the arts, inspired by the rugged beauty around them. It is a place that has captured my imagination, with its rugged coastline and ever-changing light that brings me back time and time again. Arriving on Tory Island with my friend and fellow photographer Lea Tippett, we end our first day shooting by Tory Island pier on a beautiful summer’s evening, with the mountains of Donegal in the background. The sea can be formidable. This little place, which is just three miles long, had its darkest hour in 1974, when a relentless eight-week storm cut it off from the mainland. While the authorities wanted the entire island evacuated, the islanders remained defiant and refused to leave. It is this strength of the islanders that has preserved Tory, with the crucial effort of a determined local priest named Father Diarmuid Ó Peicín. Tory now has a very active community, regular daytime boats, more sea defences, a shop, a gallery, one hotel with pub, one sparkling social club and a hostel. 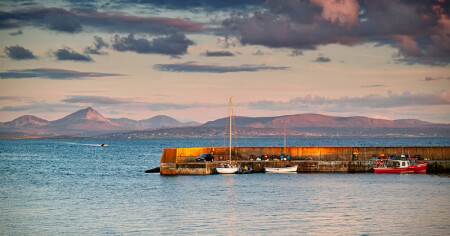 Trying the new SIGMA 24-70mm f/2.8 DG OS HSM Art at its maximum focal length, it surprised me to see how sculpted the image was, with the pier standing out in the pink evening tones. When searching for an ideal location, I look for places with a simple point-of-interest: a lighthouse, hut, even a sea-stack or an isolated stone. Then I begin my search for the best light, which often results in very early starts, walking in darkness and hoping for a decent dawn.
The waking of day two and the ideal location scouted to try this newest Art lens on a very long exposure. Using a 15 stop ND filter with the appropriate ND grad, we headed for a strange hut at the top of the cliffs, which was originally used by the famous painter Derek Hill. With inspiring views like this, I can see why. Nowadays, many of the islanders are painters, capturing the spirit of the island through their brushes. As I arrived, interesting blue-black clouds were moving in, creating a gothic visionary feast. The sensor of the sd Quattro H recorded the 120 seconds exposure with no noise and crystal clear – the clouds worked their magic, leaving space to the first little traces of light. 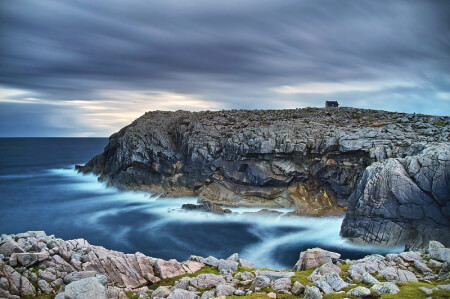 Strong winds are a regular occurrence on Tory, constantly changing both skies and landscape, bringing a completely different feel to my second dawn shoot of the morning at the majestic cliffs on the road to Balor’s Nest.
Dark myth surrounds this area and the morning’s spectacle at the red cliffs of Tory certainly didn’t let me down. Standing at the edge of the cliffs at dawn and looking down towards the bay, the feeling was like receiving an embrace from gigantic arms. I used the 12-24mm Art this time, which really came into its own and, having noticed some curious big brown seaweed down in the bay, I used a polarizer, together with a ND grad to enhance the lower part of the scene. Big red clouds were dancing above the high rocks, leaving room for the first pale blue sky seen that day.
A short time later the sky was almost clear, yet still warm with the early sun rays, so I approached the cliff opposite a house by the old pier. I had walked to this spot the afternoon before and thought that it could be ideal for a dawn shoot. With the sun still rising, the light was almost perfect, using a NiSi polariser and 0.6 ND grad and framing the image with the mountains and hills of northwest Donegal in the background. 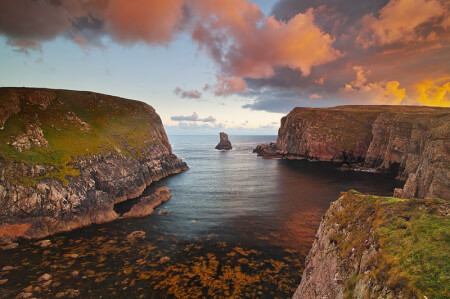 As my final evening on the island arrived, I wanted a more intimate approach to Tory, so I ventured down to the shoreline. Sometimes the image I want to create forms very naturally in my mind and this was one of those occasions. The rocks displayed a very intriguing texture and I wanted to include them in my composition, so I set the tripod and camera on the low rocks and waited for the light to fade.
Tory didn’t fail me and delivered such a delicate and pastel sunset that was such a privilege to witness. The 24-70mm Art lens let me achieve the maximum level in terms of colour accuracy and sharpness. The Foveon sensor once again did its work, capturing all the subtleties beautifully. A twenty-five second exposure enabled the colours to become deep and rich and smoothed the waves against the rigidity of the rocks, almost melting these opposite elements. Shooting at ‘wave’ level means that the tripods get eaten by the salt water, literally. I currently use a Manfrotto Befree, as it is lightweight and lets me walk for hours without feeling weighed down.
Leaving Tory Island behind, my next destination was the Southwest coast of Ireland, arriving in Clogher Head to soak up a solitary dawn. Clogher Head lies in the Iveragh Peninsula, also known as the Dingle Peninsula, a stretch of land with an almost prehistoric mood. As I wanted to walk light, I took the SIGMA dp1 Quattro, which fits in a pocket. I used its 19mm f/2.8 lens with the appropriate ND grads to shoot this primordial panorama towards Sybil Head and the Three Sisters, as the clouds drew back their curtain leaving room for the incoming rays. This camera may be small but it is certainly mighty. Its high quality lens performs well, even handheld, in relatively low light. 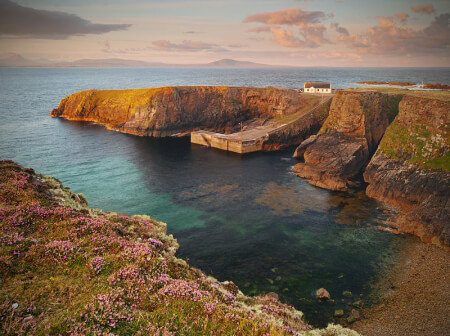 Walking along the coastal path, on top of the cliffs from Dunquin village, the island of Great Blasket suddenly comes into view, making its entrance like a big whale far out at sea.
Just a few minutes before this capture, it was raining and all was white. I kept my trust in the wind and the movement of the clouds, setting up the sd Quattro H with the 12-24mm Art lens and waited for the sun to come through. These are special moments indeed and, for me, sum up the joy and opportunities of landscape photography in Ireland.
In the foreground, looking at the Blaskets, you can see the ruins of the school house, once part of a village created amongst the cliffs and used in the famous film ‘Ryan’s Daughter. While the roof collapsed a few years ago, the double entrance, one for boys and another for girls, is still visible.
Once the home to around one hundred and fifty people, the last residents left Great Blasket more than sixty years ago. All that remains is a now ruined village of stone houses, huddled together on the slope of the hill-shaped island, which is only half a mile wide. Hard, simple, yet somehow rewarding and unforgettable lives, the memories of Blasket’s people have been put on paper and preserved forever by a few of them, written in the ancient and beautiful Gaelic. Captured with the dp1 Quattro, while heading back to the boat from the main path, using Lee Filters 0.75 ND grad hard and a 0.9 ND soft grad to create the effect I wanted. 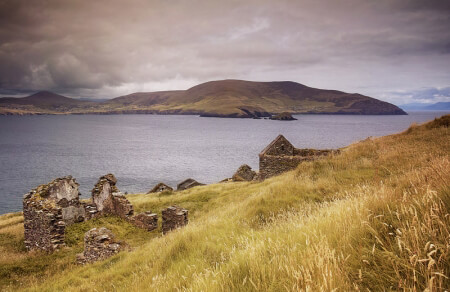 Twenty kilometers north of Dunquin is the little picturesque village of Ballydavid. By the ancient pier I came upon a currach, a traditional Irish boat, historically built with a wooden frame, over which animal skins (and later canvases) were stretched. These little boats tackled the often treacherous sea, enabling the local men and women to fish.
I felt the filters were leaving too dark a mark as the image had no straight horizon line. For the final image shown here I used the Super Fine Detail mode (SFD), which allows the camera to shoot seven different exposures which are then combined through the software into one noiseless image with an extensive
dynamic range, thus achieving the effect I wanted. 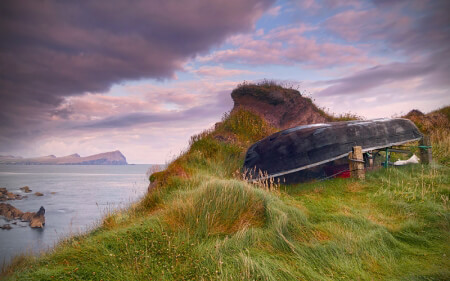 Further south lies Valentia Island, one of Ireland’s most westerly points and described as one of its ‘best kept secrets’. Bray Head, on Valentia’s southwest coast, offers the most incredible views out to the Skelligs, Blaskets, the Dingle Sound, Iveragh Peninsula and Valentia itself. The path up to Bray Head is usually a very pleasant walk, but that morning I found myself running, determined to catch the first rays of sun.
Looking down the lens, there they were. Skellig Michael and Little Skellig, two crumbs of stone in the endless ocean, appearing from the coast on the beginning of the day, with Bray Head’s cliff and its watchtower in the foreground, looking like the bow of a stone ship ready to set sail. Skellig Michael was once inhabited by monks, who between the sixth and eighth centuries built an incredible site of beehive cells, stone crosses and oratories. Abandoned in the late twelfth century, it is now a World Heritage site, accessible by boat trips to the ruins during the summer months. 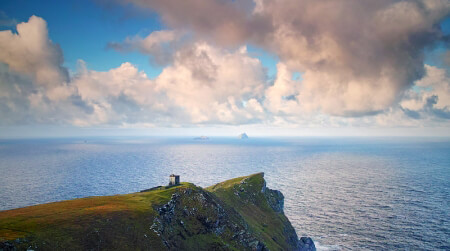 At the end of my trip I found myself reflecting on what it is that brings these extraordinary places and unique stories together. The unwavering perseverance of the men and women of this ‘Hidden Ireland’, from the present and from the past, to survive in such extreme environments for, what may appear to us, very little gain. There is something deep and ancestral about it, something that may lead us to re-evaluate our everyday struggles and lead us to reach for the genuine joys that life can offer.
It is also the endless, unbeatable power of nature. The same power that is sending crashing waves on the iconic Giants Causeway’s stones, to wash them from the tourist’s footprints and let us remember who rules here.