John G Moore is a professional photographer from Glasgow Scotland.  He is known for great versatility in his work, ranging from landscape, to portrait, to music, fashion & beauty. Creative from his early years, John started his photography with a Kodak brownie that his grandfather gave him when he was five. In his teens, he honed his skills shooting Rock Bands at the legendary Glasgow Apollo. John has since progressed to become one of the UK’s formative photographic talents. In this latest SIGMA Lounge article John shares with us his on-the-job review of the new SIGMA 85mm F1.4 DG HSM | Art lens.

I was commissioned early December 2016 to shoot some promotional portraits of Paul “PJ” Moore, pianist and electronic synthesist behind the pioneering sound of internationally acclaimed Scottish trio The Blue Nile. PJ is currently involved in a really interesting new project based around Scottish Physicist (and Einstein’s hero) James Clerk Maxwell, hence the requirement for some up to date portraits.


I had just received my SIGMA 85mm F1.4 DG HSM | Art lens prior to the shoot, so decided to put it through its paces. I wanted to ascertain how it compares to the Zeiss OTUS, Nikon, and Sony G Master 85mm lenses I use. My opinion below is (as always) subjective, as what I like in an 85mm lens you may not, but I hope that sharing my experience of using it will be of use to some readers, particularly those who are interested in buying the lens. If you’re a total geek then you may be better served with a fully technical review posted elsewhere as I review any equipment solely from my perspective as a professional photographer.
All shots with PJ at work were taken at RNR Studios Ltd using natural ambient light. Shots at my studio used a mixture of ring light and strobes. As a side note, It was nice to see some classic analogue musical instrument kit from the Eighties when shooting with PJ, including a Mini Korg 700S, a Korg MiniPops drum machine, an Obeheim Xpander and the classic Roland Jupiter 8. (the latter especially, making me rue the fact that I sold my own) 😉 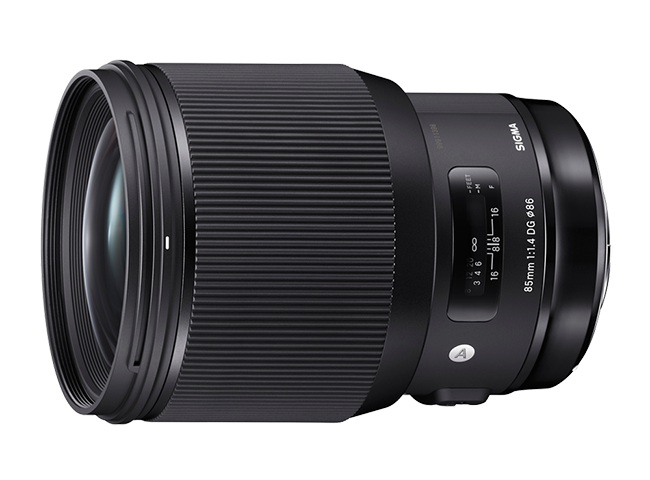 LENS INFORMATION
The SIGMA 85mm F1.4 DG HSM | Art is a new short telephoto prime lens aimed for use on full-frame DSLR cameras. The lens is comprised of 14 elements in 12 groups and features a rounded 9 blade diaphragm which creates an attractive blur (Bokeh) to the out of focus areas of the image. It has a Hyper Sonic Motor (HSM) for smooth, quiet and accurate autofocusing, Super Multi-Layer Coating to reduce flare and ghosting, a minimum focusing distance of 85cm / 33.5in and a maximum reproduction ratio of 1:8.5. The SIGMA 85mm F1.4 DG HSM | Art ships with a good quality soft case and strap and also a large plastic petal-shaped lens hood. It accepts 86mm filters.
Weighing in at 1130 grams and measuring 12.6cm in length, the SIGMA 85mm F1.4 DG HSM  Art is a pretty big and hefty lens given its focal length. It is significantly larger and heavier than the other standard 85mm lenses, with the exception of my Zeiss Otus 85mm F1.4 where it’s comparable. As seen in the photos below, it complements a full-frame camera like my Nikon D810 well, feeling well-balanced if a tad heavy!
Like all Sigma Art Series lenses the build quality is excellent. The lens has a plastic shell with a mixture of metallic parts and a new compound material, Thermally Stable Composite, used inside. It also incorporates a brass bayonet mount that’s pro-ported to be more durable. The optical elements are all made from high-grade glass. The focus ring is wide, nicely damped, and is ridged for an easier grip.

Focusing is internal and manual focusing is possible when set via the Focus switch on the lens barrel. Full-time manual focus override is also available at any time simply by rotating the focus ring. A clear distance scale in both metric and imperial runs from the lenses closest focusing distance of 0.85m / 2.79ft to infinity.

One obvious exception with this lens is its lack of built-in Vibration Reduction, although the very fast maximum aperture of f/1.4 helps to make up for this somewhat. Personally I’ve always found Sigma’s Optical Image Stabilisation to be really beneficial in a lot of low light shooting situations. Do I miss it on this lens? – the honest answer is yes I do. It’s a hefty bit of glass and if you’re not rock steady when shooting at slower shutter speeds images may exhibit slight blurring due to movement

FOCUSING
The SIGMA 85mm F1.4 DG HSM | Art lens has a really wide focus ring. There are hard stops at both ends of the range, making it easier to set focus at infinity. Circular Polariser users will be pleased that the 86mm filter thread doesn’t rotate when focusing.

When it comes to auto-focusing, the lens was a great performer, it was fast, consistent, and reliable on both my D800 and D810 bodies. I didn’t experience any “hunting” when focusing in both good and bad light, with the lens focusing accurately on the majority of occasions. The main issue I had shooting at such wide apertures was actually subject movement. I also encountered a few occasions where the AF double faulted but it was actually due to error on my part; I had become so engrossed that I had moved too close to the subject. We shot in a really low light situation when Paul was at work and as you can see, the SIGMA  85mm Art performed excellently.

The SIGMA 85mm Art is also a super quiet performer, thanks to the built-in Hyper Sonic Motor. As a Pro the last thing I need when trying to build a rapport whilst shooting portraits of personalities (I hate the term celebrity) is a really noisy AF motor on the lens I’m using. I had to stop using my Sony 85mm G Master in that situation because it makes a terrible crunching noise when focusing. In saying that, I’m not missing my Sony 85mm GM at all as the SIGMA 85mm Art kills it for sharpness too. To avoid the noise issue on my A7RII, I’m using the 85mm Art in Sigma fit via the MC-11 adapter. Another bonus here is that the lens is very well-suited to video recording.
SHARPNESS
This lens is exceptionally sharp. In my opinion it’s probably the sharpest 85mm I’ve ever used. Centre sharpness is outstanding from f/2 to f/11, with f/16 and above becoming adversely affected as diffraction increases. The edges are highly commendable too, being almost as sharp as the centre. Again, apertures from f/2 to f/11 produce the sharpest results.

BOKEH
As touched on previously, Bokeh is a word used to denote the blurred, out-of-focus areas in a photograph. It is usually described in qualitative terms, such as smooth/creamy or harsh. In the SIGMA 85mm F1.4 DG HSM | Art lens, Sigma have employed an iris diaphragm with 9 rounded blades, which has resulted in great bokeh in my view. However, bokeh evaluation is somewhat subjective, so I’ve included several images showcasing it for your perusal.

CHROMATIC ABERRATION
Chromatic aberration also known as “color fringing” or “purple fringing”, is a common optical problem that occurs when a lens is either unable to bring all wavelengths of color to the same focal plane, and/or when wavelengths of color are focused at different positions in the focal plane. This is typically seen as purple or blue fringes along high contrast edges in a photo. Chromatic aberration is conspicuous by its (almost complete) absence in the shots I’ve taken with the SIGMA 85mm Art lens. 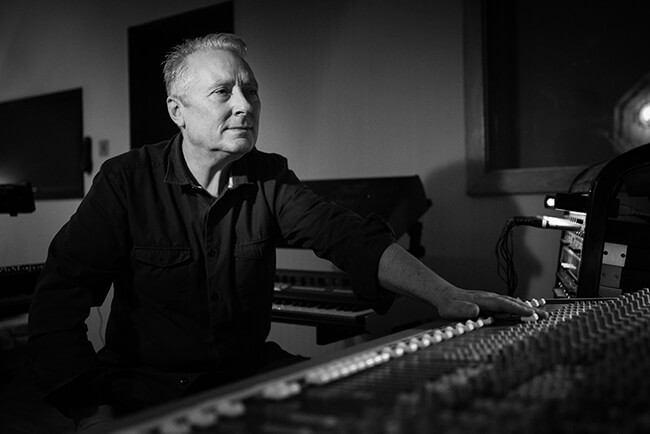 VIGNETTING
With the lens set to its maximum aperture of f/1.4, there is fair amount of light fall-off in the corners. Stopping-down to f/4 virtually eliminates this. Whilst some people might find issue with this, I actually quite like it as I often add a fairly heavy vignette to my portrait shots in post. 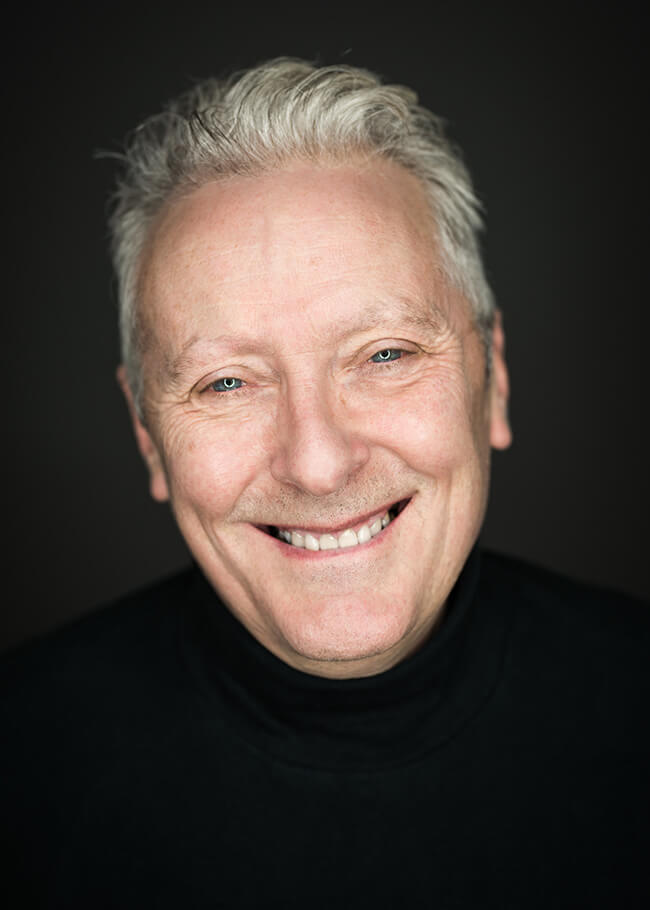 CONCLUSION
In my opinion, the SIGMA 85mm F1.4 DG HSM lens is a truly exceptional portrait lens. When sharpness is compared directly, there’s no doubt that it’s better than my Zeiss OTUS and Nikon 85mm 1.4, and it leaves my Sony G Master 85mm for dead. Since using the SIGMA 85mm F1.4 Art it has become my go to portrait lens. The sharpness and contrast straight out of the camera are outstanding. My only gripe is that I wish it had Optical Image Stabilisation. A few of my followers have asked me recently why some of the newer SIGMA Art lenses don’t have it. To be honest I’ve never been given a clear answer, but my guess is that the patent lawsuit with Nikon a few years back regarding OIS might be a factor?
The bottom line: Anyone want to buy a Zeiss OTUS 85mm? 😉 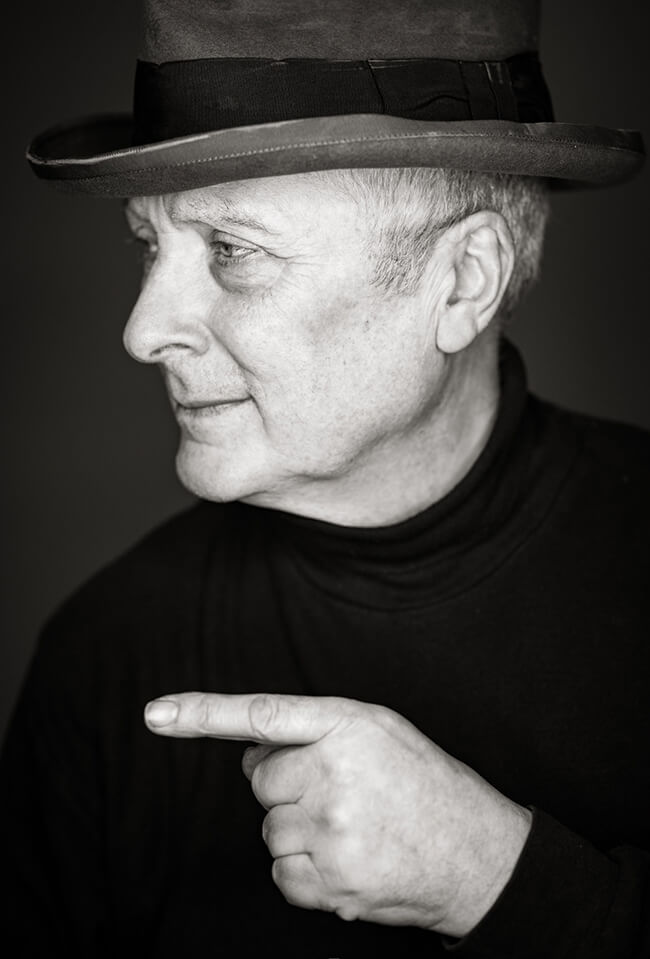 PLUSES
– Outstanding build and image quality
– Super sharp. Equaling (if not exceeding) my Zeiss OTUS at 1/3 the price.
– Great Bokeh
– Fast, reliable AF
– Price – better and cheaper than its rivals.
MINUSES
– No Image Stabilisation
– Mild vignetting from f1.4 to f4.0 (although that’s actually a plus for me) 😉
– The Sigma 85mm F1.4 DG HSM lens is currently available for £1099.99 / $1199.99 in the UK and the US, respectively.
To see full size images visit John’s blog at the following link:  https://spark.adobe.com/page/eEg3M5KekAGvY/
To connect with John on Social media: : https://plus.google.com/u/0/+JohnGMoore
To view his website to be relaunch in January 2017:  http://johngmoore.com/