The Foveon direct image sensor has been the feature of every SIGMA digital camera and is the world’s only image capture system to use vertical colour separation technology. Almost all other image sensors are mosaic sensors, which use an array of RGB colour filters in a single horizontal plane to capture colour information. In contrast, the Foveon direct image sensor captures colour vertically, recording hue, value, and Chroma accurately and completely for each pixel.
The newly developed Foveon X3 Quattro is the latest generation of this unique sensor. While retaining the distinctive characteristics of its predecessors, it offers an even higher level of image quality. Resolution is 30% higher, and its noise characteristics are further enhanced.
Those who have experienced the evolution of the Foveon technology can truly appreciate the benefits that each model has offered. Photographer Paul Monaghan has been a Foveon-believer since his first introduction to the SIGMA DP3 Merrill which he still relies on for his creative work. Paul has analysed the colour fidelity of the Foveon sensors in-depth and has been inspired by the general 3D look of the files. Paul says “There is something magical about the per pixel sharpness and the way depth of field transitions are handled, they seem to keep more detail”. This inspiration sparked the idea for his SIGMA dp3 Quattro Colour Splash image and he has shared with us the thinking behind it: 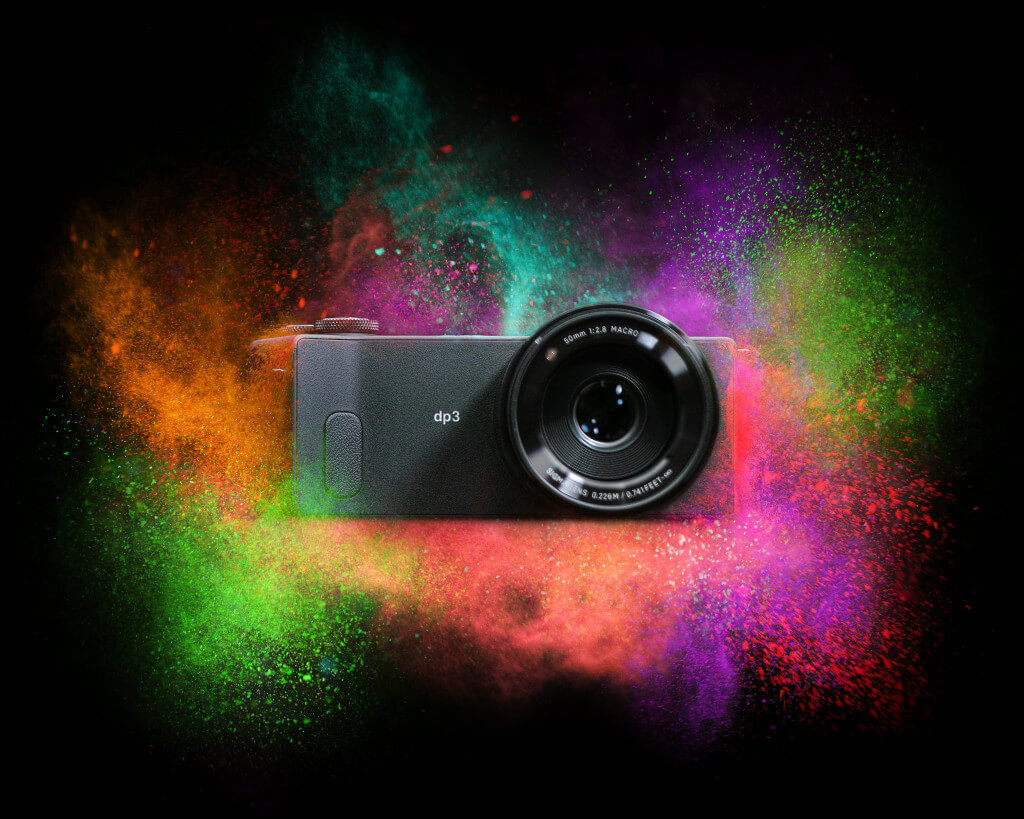 The concept behind this image was my attempt at visualising one of the unique features of the Sigma cameras; which is the full-colour capture of the Foveon sensor inside.
I figured the best way to do this would be to create an image of the camera with colour bursting out from around it.
To do this I used Holi Powder and having used this extremely messy stuff before I decided to do the shoot in the garden, this took me outside of my usual comfort zone as I would be using mostly ambient light. Although I still wanted to create an image which had the appearance of being shot using flash! 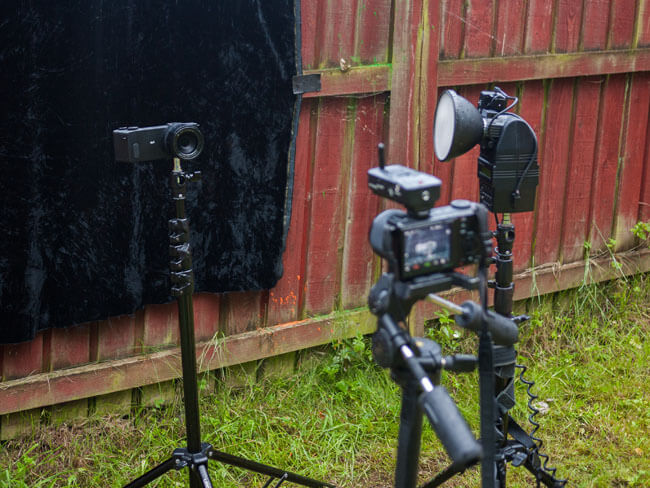 The setup is rather simple as I was using the sun (diffused with some clouds) as my main light.   I had to think about where to place my subject so that the light was in the direction I wanted while also looking for something I could place my background onto, for me it was the left side of my back garden which had a fence I could use to hold my background.
I draped some black velvet material over my fence. I then used a light stand to hold the subject, the SIGMA dp3 Quattro, in place and set my main camera, the SIGMA DP3 Merrill, onto a tripod to keep everything steady as I was going to be shooting multiple frames to blend in post. 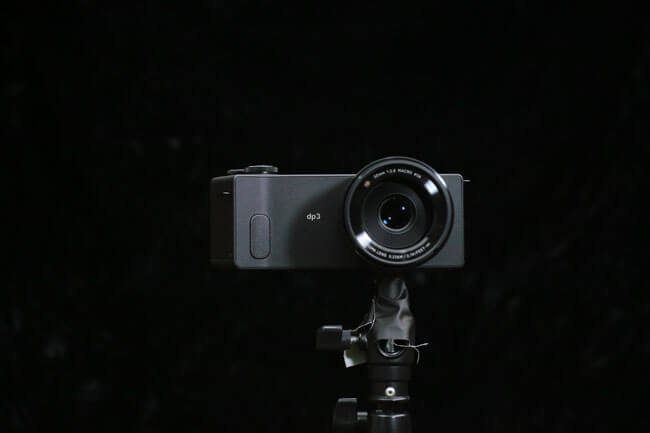 For the first part of the shoot it was all about making the camera look nice. Whilst thinking about the composition and leaving space for the surrounding elements that would be added later. I decided to go for a front on approach with the camera in the centre of the frame.
I set the DP3 Merrill to ISO100, f2.8, 1/800sec and took the shot and then a few extra shots with a strobe to bring some life into the front of the lens. 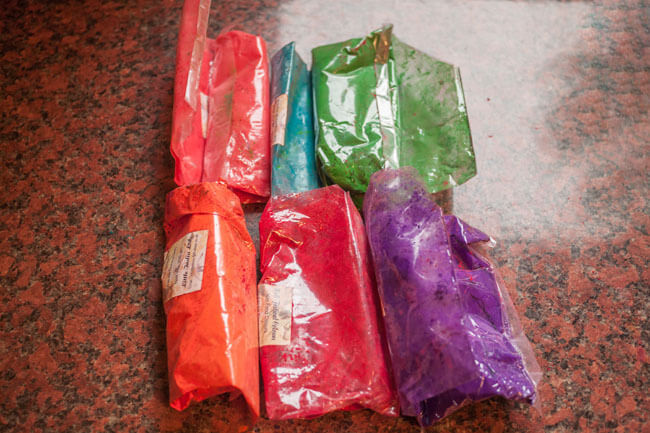 There was some prep to do for this part of the shoot because Holi powder can kill cameras and the last thing I wanted to do was damage such a wonderful piece of equipment. 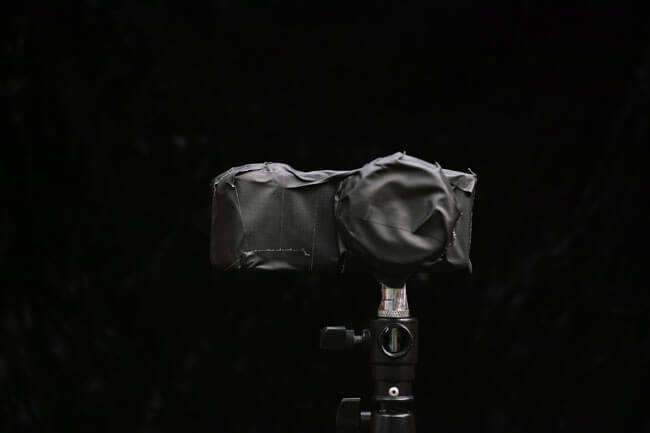 To prep the subject/camera for this part I removed the battery and wrapped the camera in in cling film, then a layer of Duct tape just to make sure none of the dust/powder would get inside. 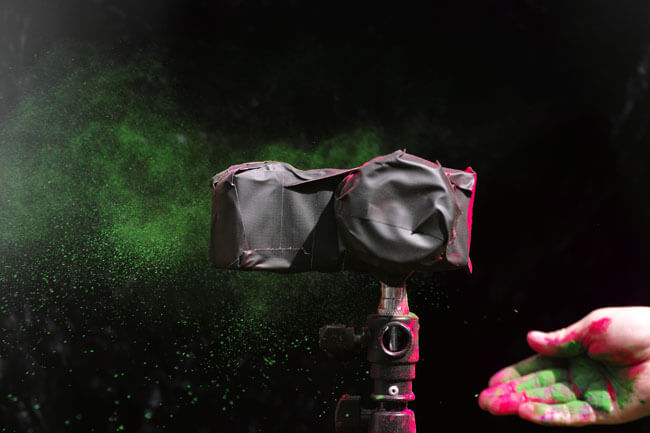 I then placed the camera back onto the light stand and used the 10 second timer on the DP3 Merrill to give me time to move back and toss the holi powder onto the subject.
For these shots I was wanting to freeze the powered in place and get a little more in focus I changed my camera settings to ISO 400, f4, 1/1600sec.
When doing this section It was important to do several shots of each colour of the powder, throwing it at different angles and directions to give me a few options later. It was also really important not to leave any areas of the subject void of powder so as to make each of the colours blend well during post.
The colour splash (Holi powder) parts of this image were shot with nothing but natural light. 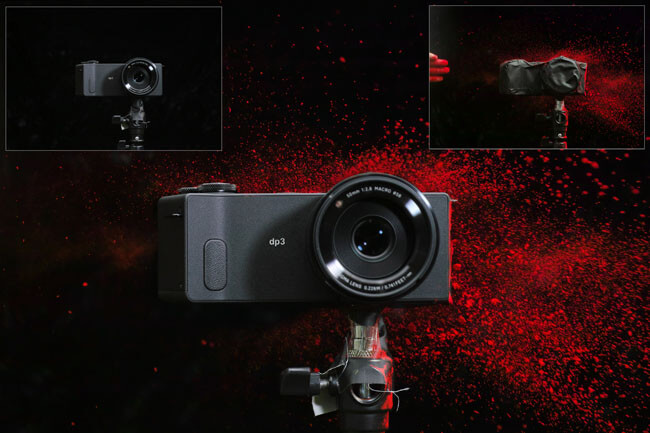 The first thing I had to do was look at my collection of splash images using Sigma Photo Pro and make a selection of ones I thought would work well together and export them as TIFFs before sending them into my editing software.
I used Photoshop CC and loaded the files using “File, Script, Load Files Into Stack” and opened the files I wanted. This created a new image for me with all my splash shots as layers.
Once I had the images loaded, I took the image of the dp3 Quattro itself and set it to the bottom layer. Then I built up the rest of the images one by one using the “Lighten” layer blend mode which will only display pixels lighter than the layer below. I used masks on each layer to paint out the sections which weren’t needed.

Here is an example of two layers being blended this way:
I kept adding in layers until I reached my final image. 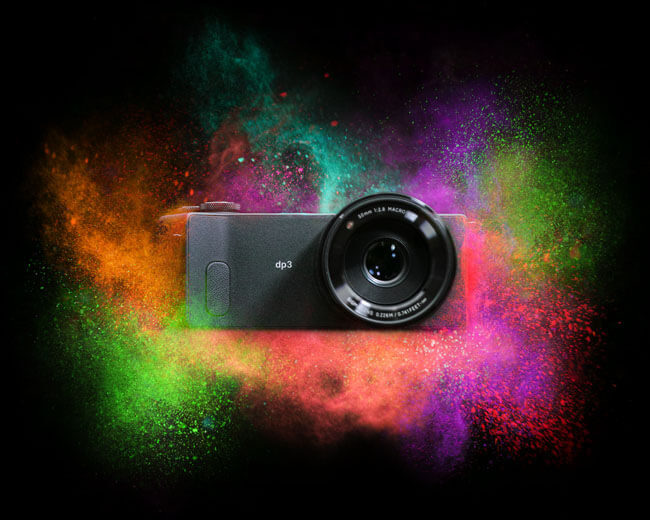 *note*
Due to the camera being a little larger and slightly different shape because of the tape and cling film I had to do some resizing and extra cloning to clean up some parts of the image.
For details on the Foveon Sensor technology, visit the following link:
http://www.sigma-global.com/en/cameras/dp-series/technology/#sensor
For more details about Paul Monaghan, The Kirky Studio, visit his website:
http://www.thekirkystudio.com/