Sigma Imaging (UK) Ltd. camera ambassador Karl Holtby traveled to Unst; the most northerly inhabited island in the United Kingdom, and one of the most unique islands in Europe. It has an area of 46 square miles (120 km2) which is largely grassland, however it is the rugged beauty of the awe inspiring coastal cliffs and secluded golden beaches that make this remote island so special. Getting there is an adventure on its own, the reward however is a unique scenic beauty, rich in history and heritage which leaves us in awe of such a magical space.

When I was offered the keys to a cottage on Unst my first thoughts were, “Where the heck is that!?” Having its location pointed out to me that it was part of the Shetland Isles, with Unst being the most northerly of those isles, in fact it is the most northerly point of the UK. Most maps will locate it somewhere off the coast of Aberdeen, when in actual fact it is a 12-14 hour ferry crossing from Aberdeen to Lerwick on the mainland of Shetland. Unst is nearer Bergen than Aberdeen, and nearer the Arctic Circle than it is to Manchester. North of Unst the next stop is the North Pole, you get the idea, and it’s quite remote. A little bit of research on Google earth and I knew I needed to visit this place, which looked to have a little bit of coastline around the Hermaness reserve that looked quite promising photographically. I couldn’t find many good images of this place and what I could find were just snaps, this was another draw; I loved the idea of being somewhere a little different. My only concern, initially, that we might struggle for subject matter. However, the idea of being cut off from most of civilisation for a week was also becoming very attractive.  So I spoke to my good friend Paul, who was equally up for the adventure and the ferry was booked!
After an easy drive up to Aberdeen we boarded the ferry very quickly, all with the minimum of fuss, it was amazing how quickly and efficiently everyone was boarded. I had been concerned about the long crossing but we were lucky and the ship was smooth for most of the night. Arriving at Lerwick at 7:30am, it’s then a case of another two very short ferry crossings, firstly from the top end of the mainland, from Toft to Ulsta which is on the isle of Yell, then from Gutcher to Belmont, on Unst.
Once settled into out cottage we headed straight out to Hermaness, which is probably the best known location on Unst due to it being a huge seabird colony. After a walk of a mile or so, the view opened up to us, as I had expected, this stretch of coastline was breath taking, huge dramatic, rugged cliffs. I set up for the shot, upon opening my backpack the wind blew two of my filters rings out to sea! This was an early wake up call for the winds we would encounter later that week.


Another mile or two down the Coastal path, just out to sea is the UK’s most northerly lighthouse, Muckle Flugga, in fact on the isle of Unst, everything is quite understandably the ‘UK’s most northerly’. We headed over to scout compositions for Muckle Flugga, it’s such a wild and rugged scene that it really is difficult to convey photographically, the light was quite flat so we decided to head back later in the week.
On day two as is always the case on photography tours, the alarm was set before sunrise, enabling us to get to location and set up in time for the good light, hopefully. One of the nice things about Unst is that nothing is ever further than a fifteen minute drive away, however long hikes are rewarded with breath taking stretches of coastline. Day two also involved 50-60mph winds, which as you can imagine creating quite challenging conditions to shoot in. I have to say that I do love it when conditions are wild, I relish the challenge, it’s so much more rewarding when you’re working quickly and you manage to come away with a nice image. The below image was made on this particular morning, I had to clean the filters between every shot because of the sea mist and sleet, plus those immense winds. The light was beautiful however, bathing the side of this huge rocky outcrop in golden light, the Sigma SDQ-H + 20mm Art lens rendering a beautiful image. I do prefer the simplicity and clarity of a prime lens; it also makes me work harder to fine tune the composition.

After the morning glow of sunrise, we further explored the area of Skaw. The coastline here is beautiful but I didn’t just want to show the usual long exposure seascape shots, I wanted to produce a series of images that portray the landscape character of this island. Skaw is interesting as an ex-RAF base, which was closed down shortly after WWII, the remains of which make for interesting subject matter. A sense of history is evident, amusingly with flocks of sheep taking shelter from the elements in the various abandoned buildings. The images below shot handheld with the Sigma SDQ-H + 24-70mm Art lens, as I mentioned previously, I do prefer a fixed focal length prime, but as a one lens to do-it-all when exploring, the 24-70mm is a very useful focal range indeed with exceptional quality for a telephoto lens, I have come to realise that the entire Art range of lenses are second to none.

A trip to the Shetlands wouldn’t be right without bagging an image of the wonderful Shetland ponies dotted around the island. I’m usually quite wary of horses so didn’t quite know what to expect of these characterful little beasts but they were incredibly inquisitive and friendly, nibbling away on my boots! The below shot with SIGMA sd Quattro H + SIGMA 120-300mm F2.8 DG OS HSM | Sports lens.

Day three, the wind speed had increased, 70mph! It could have been more. We still got up early and again returned to the Skaw area of Unst as there are so many coastlines to shoot here, all of it unbelievably wild and rugged. Waves bigger than I had ever seen were crashing against the cliffs, waterfalls were running backwards with the immense winds! On the east side of Skaw there was absolutely no chance of setting up a tripod in these winds coming directly at us from the sea, so I very quickly rattled off a few handheld images with the SIGMA sd Quattro H + SIGMA 24-70mm F2.8 DG OS HSM | Art lens. Even shooting handheld in these conditions is extremely difficult, the below images however are testament to the optical stabilisation on the 24-70mm | Art, helping me to convey the power of the elements at work here.


Not to be deterred by the insane winds, I headed over to the western side of Skaw; I’d scouted a particularly nice composition the previous day. I felt sure that if I could find a spot halfway down the cliff face that I could pull a nice long exposure out of the bag. The below image is a 90 second exposure, taken on a day when wind speeds were in excess of 70mph, the lesson here, never be put off by the elements. In fact I find this way of working incredibly exhilarating and it often produces my favourite images, I certainly felt alive that day! The behind the lens image shows me huddled on the cliff face protecting my kit from the wind.


On day 4 the wind had eased somewhat, a mere 50-60mph, I must stress that this is quite common on Unst if you are planning to visit. After a while you kind of long to escape from the sheer onslaught of the elements, we’d hiked many miles in rugged terrain in these winds and it was beginning to take its toll on us and the kit, which was constantly battered by sea spray. Although I must point out that I was incredibly impressed with the weather sealing of all of my Sigma kit, particularly the SIGMA sd Quattro H camera. On this day I packed light with the little SIGMA dp0 and dp2 Quattro’s and we headed to one of the many secluded beaches, found in sheltered bays. It was such a relief to be out of that wind for a while and without my usual very heavy backpack.

Day 5, ah no wind! Well very little. With the elements abating we’d planned a walk back to Muckle Flugga, we had to come away with a shot of this most northerly lighthouse. After a tough hike involving me falling in to a peat bog, much to my friend’s amusement, we eventually reached the coastline near Muckle Flugga. Thankfully the weather remained calm and I got the below image of Muckle Flugga lighthouse bathed in late afternoon light. A huge squadron of Gannets flew past as I was composing, each one of them lit up by the setting sun. This image actually blew me away, is deserves printing large scale to be appreciated, each one of those Gannets is perfectly sharp. The Sigma 120-300mm | Sports is truly amazing, this was shot handheld!

On our last day we simply decided to explore, a long walk to enjoy this island as much as we could before leaving. It was such an amazing experience to reach the UK’s most northerly point, it is a wild, pristine, remote and beautiful island, and there is only the power and energy of nature along this coastline. We didn’t see another person on the coast all week, we had no phone signal, no Wi-Fi and we fell in love with this island. I will be back late summer, and running a workshop there in 2019, if you’re seeking peace and wild beauty, join me.

To see more of Karl’s work visit one of the following links: 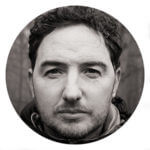